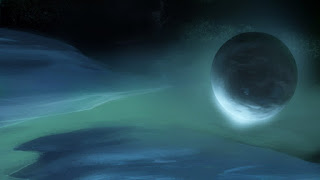 The familiar darkmatter starcraft responded eagerly when Kell handed the controls over to Sette. The Raven was ready to take on her new assignment. Dranke mock-saluted his two second-in-commands, and they grinned back at him as the ship jumped. Again, and again the Raven jumped, heading into the dark inky night. The route they had chose avoided most galactic clusters, reflecting the feeling of blackness pervading the ship. Dranke strolled up and down the bridge pensively. Had he made the right decision? He remembered that the General has insisted that he not remove his subroutine; and while he realized the wisdom in that, it filled him with a sense of unease. He resisted switching on the Jen subroutine; he would use it only in emergencies.

Kell on the other hand had no such issues. She was perpetually connected to spacecommand and the Hnnet. This would be an interesting dynamic once they had to decide whether the subroutine was to be ditched. Dranke decided not to influence things at this stage. One small step at a time. He smiled at the irony of his own thought. Here they were eating up lightyears with the jumps the darkmatter starcraft was undertaking. In some senses, they were time travelers. No in all senses. He knew that every time they went on these trips, there was that much more time which elapsed on Earth. They had stopped counting. And they were frankly in the business of moving forward. In time. He mulled at this as they saw the outline of Jexx on the hologram.... just an instant before the whole planet rendered in 3D glory. Dranke looked at Sette "Open comms with the Jexx; I want to explain our new status to them." Sette complied. The Jexx commander who responded was not someone they had seen before. He looked openly hostile "You are being surrounded as we speak humans. This time we will not let you escape." Dranke motioned to Kell to engage the shields, and replied calmly "We are no longer part of the military. We come in peace." The commander looked taken aback "So you are rogue?" Dranke watched the commander 'swimming' in the fluid as he spoke "No we do not have that concept in humans. We have come to trade with you." The hologram went blank.

In a few minutes, the hologram showed three Jexx. It was the traditional triad one had come to expect. Dranke suppressed a smile "Welcome back. I was hoping to have an audience with you." The Jexx looked curious "We want to board your ship. You have not allowed us on board. Not like true partners." The translation was getting laborious. Dranke nodded imperceptibly to Sette "We will get to that as well. Are you going to host us, or should we leave?" The commander seemed to get the wind knocked out of him "Yes, please dock. We do want to trade. The Hnnet makes it impossible for us to trust anyone." Dranke smiled gently and signed off, with a vague feeling that all was not well. The docking station in their space station started to bleep blue and red as they indicated the docking area. Kell and Sette got to work docking the old style. They did not want to reveal the Hnnet modification just yet. The Jexx docking tube docked in the traditional style with the docking aperture in the Raven's lock. Dranke waited as the the Jexx commander entered with his two attendants, his name was Nexe. He spoke "So what do you want human? Are you representing the Hnnet again?" Dranke kept his anger in control "No, we are not. I wanted to know if we can trade. Especially, we are keen to know about your microtechnology which allows you to build such small ships." The Jexx made a noise sounding like something between a cough and a grunt "Of course. We want to know about your shielding technology. It is very good." Dranke nodded. He was prepared for this. They had old shielding designs which were used by spacecommand from before they had met with the Hnnet "We are happy to share those with you." They began to talk in earnest.

After a while, Dranke noticed that the hostility had vanished. Nexe was beginning to boast about their advances, revealing much more than was necessary. He filed that away for future use. The Jexx commander was saying "For the first time, you have come as partners. We are happy to trade. But only with you. No more humans will be tolerated by us. They are liars and cheats." Dranke decided not to come to humanity's defense. "So why have you been fighting with the Hnnet?" "They do not respect us. They treat us like outsiders. They think they are better than us." Dranke understood, it was but natural. He was learning so much. "And why do you travel in threes?" "We are mates. And three of us are a unit. A family. We preserve our identity and sanity in this fashion." Dranke nodded. He absorbed ever little scrap of information like a sponge. It was intelligence and it was priceless.

At the end of negotiations, Kell sent over the schematics of the old Earth technology shields and got the schematics of the Jexx microtechnology in return. It was a successful trip. The Jexx also gave them some wood analogue as a gift. This would be priceless on Earth. The crew was going to enjoy the bonus. They parted friends. Dranke smiled as the ship undocked from the Jexx station. Sette looked at Dranke inquiringly. He grinned at her "Set course to the Hnnet homeworld. Time to pay them a visit."

The Raven accelerated rapidly away, searching for enough distance away from Jexx to make it's first jump.