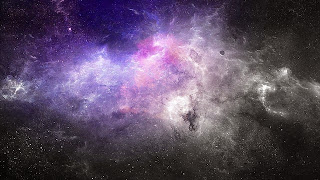 This time was different for Dranke. He was still a relatively young man, but he knew something in him had changed. He was beginning to question everything. What if the Leader was wrong? What if the whole spacecommand was in the wrong? He checked to see if his Jen subroutine was listening in. It was switched off. He still felt uneasy. How was he to reconcile the fact that the Jexx commander Yod had seemed to be prisoner to his own triad of Jexx attendants. And the Hnnet seemed to good to be true. What about the strange creatures he had seen on other worlds? The electricity consuming tiny alien and the strange flowing aliens on the water planet who had seemed to want to communicate?

Was there something more than met the eye? Dranke was no longer sure. His perspective had been shattered. Was it because the Hnnet had used the Vaxe clone to convey their orders? Or was it because they were willing to find loopholes to conveniently bypass the rules of their own Hnnesset? He had to talk to the General. And sure enough, the General was walking up to him at the mess as promised, dressed in his casual attire, sidling into the long bench as he beckoned for Dranke to take a seat. Dranke sat with some amount of trepidation, sweat beading his brow, even though it was quite cold inside the mess.

He did not realize for some time, but General Selin was speaking "It was to be expected that at some time you would question the very idea of spacecommand. But this is something which even we did not expect. I guess the fact that we were able to construct a darkmatter starcraft was the first step in finding out that we were not alone." Dranke bit into the soft bread and butter omelet sandwich. It was not really the real thing, but it was supposed to taste close enough. He nodded dumbly. He looked at the General and realized he was waiting for Dranke to speak. He swallowed hastily "I'm sorry. I actually feel guilty thinking like this. I feel like a traitor." The bread was beginning to lose all taste. He wanted to throw up.

The General smiled. It was a smile of genuine fondness and concern "I know what you are going through. We all question the wisdom of the people up the chain of command. There is no right answer. But at some point, you will decide to give your trust to someone." Dranke stared at the General "What do you mean? Am I right?" The General looked at him calmly "You may be. But then again you may not. We live in a state of not-knowing. And we hope to make the right choices from what information we have. As things become clearer, these could change. What is important is that we should always seek better answers."

The General's answer frustrated Dranke. He realized that the General was telling him something, but the answers eluded him. "I am not sure I got that General. But I don't want to carry on this way." He was starting to feel panicked. This was not going the way he had envisioned. The General, however took it all in his stride. "Of course. We have to find a way to demote you to trader. You need to be in the front lines. Doing new things and working on the cutting edge. This job is more suited to Niket and the other Captains. You have to go out and make your own way." It sounded scary. But one part of Dranke was excited. It was going to be something new. No spacecommand? A trader? That would be a life full of danger. But it would be exciting! Earth would need trading routes to all the alien species over time. He would be a pioneer. He held back, not trusting himself to speak.

The General was speaking again "Of course, we can give you your old darkmatter starcraft and people who want to join you. But you need to cobble together your own band of merry men and women who will follow you." His eyes glinted with amusement. Dranke realized he had been played by the wily old General. He had known all along what he would offer the newly-promoted Admiral. He turned to the General and saluted "I call you Sir with honor General Selin." He strode off before emotion overtook him. If he had looked back, he would have seen a sad smile on the General's face. It was the passing of the guard, and the General realized he had no way to stop it happening.

Breaking the news to Fenie and Niket was the hardest thing Dranke had had to do. They both were dear friends, and they hugged him tightly. They had been through so much together. But they all had to move on, and there were no tears, but Fenie's eyes seemed unnaturally bright. Dranke hid his emotions, lest they overwhelm him "You guys were the best ever. Really. I'm thinking of poaching Kell and Piteer. I will need a real team on my ship. And the General will never let me poach Niket. He grinned ruefully "I will miss you two."

After a long night spent with Fenie and Niket, he went to bed, realizing he had to put together a team if the General was to give him a ship. It would require him to sell the idea to his potential crew. He started to make plans in his head. He would want to have the darkmatter starcraft overhauled. And a technical crew as well. He would require real weaponry. And a quartermaster. It was a long list. He kept on making it. He would also be discharged from spacecommand. He had never really been a civilian. It was going to be a new experience. He didn't realize when exactly sleep overtook him. It was full of dreams.