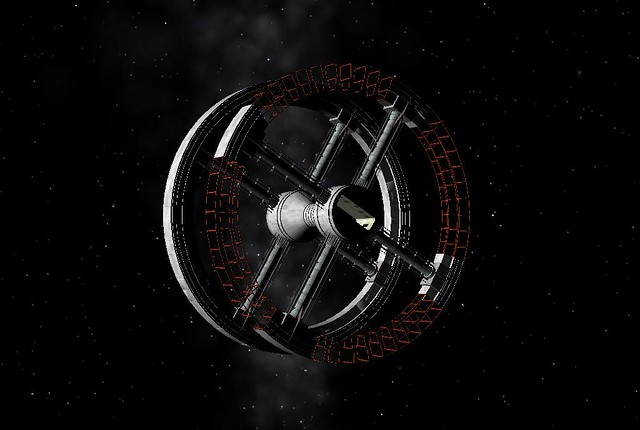 The satellite docking stations of spacecommand were prepared for the arrival of the Hnnet-enhanced darkmatter starcraft. The viewing gallery was full with cadets who would crew the two new fleets. Dranke and Niket watched in amusement as young science officers and new captains stared at the appearance of the twenty one ships which slid silently into the waiting docking apertures. Much like the Hnnet ships, they did not have an obvious docking arm. Instead, as they approached the docking station, they extruded an appendage which engaged seamlessly; the procedures more like a graceful dance than a mechanical maneuver.

Niket looked resplendent in her Admiral's uniform, and Dranke realized that he must be looking very much the same, and grinned self-consciously. Fenie was in a simple cadet's uniform, but the science director's star shone brightly on her shoulders. She was in her element, her hair thrown back severely as she looked carefully at the ships. Her cadre of science officers would take apart the Hnnet tech and put it together again. It would be back-breaking work, but once they were done, they would be able to repair their ships in their sleep. Spacecommand wanted some fail-safe devices in case the Hnnet tech failed, and Fenie would supervise the installation.

The new captains were the first on board the ships; Dranke knew exactly how each and every Captain must be feeling as they took over command for the very first time. Piteer and Kell were now Captains and they had their own crew to worry about. They led their teams aboard their spanking new darkmatter starcraft.

Dranke sighed and asked Sette and Dex to get their crew together as he walked towards the Raven. It was time for induction. Dex was now a seasoned crewmember, and he did not need direction. He grinned at the fresh new faces about him "Welcome aboard the Raven, It is the oldest ship we have in our fleet now, and the only one which has seen action. Sette is the new science officer and she will show you around the engine room and enhancements later. For now, come with me." He took them to the bridge as Dranke tuned out. He wanted to meet the new crew, but not while they took in the sights of the Raven. He knew each inch like the back of his hand. He decided to give the whole induction tour a miss.

Dranke looked up the captain's list on a hologram. Three new captains Yani, Tenne and Kisen caught his eye. They were all from spacecommand's hierarchy. Yani had simulated over 200 operations, but had never actually piloted a ship. She was one to watch. Tenne had been on an earlier version of spacecraft, which did not have a jump drive. She was a seasoned veteran, but her skills were probably outdated. Kisen was a fresh graduate from the academy. The information on him was sketchy. Why was he considered for the captain's position? It seemed strange. Dranke made a mental note. He would have to put the whole fleet through their paces. There was work to be done. The first thing on his agenda was the Hnnet Jen subroutine enhancement. He told them as much. The captains were too excited to even think about what the enhancement would entail. They all agreed eagerly. It would be some time before the enormity of being continually connected to their Admiral would become apparent to them. Dranke decided he would counsel them when the time came.

Fenie was nosing about the engine room and she smiled "You're lucky to still have Sette and Dex, Captain. I mean, Admiral." She grinned "I have to get used to calling you that, Admiral." It sounded strange to her. Dranke waved her on "It sounds strange to me as well." He joked "So I assume that you call Niket Admiral too?" Fenie was about to respond, when she saw the twinkle in Dranke's eye, and she blushed furiously. "I guess I will have to get used to that, Sir." She ducked her head as she exited the ship, moving to the next. Of all the personnel, she would be the only one who would have to manage every ship in both fleets.

Without much ado, Dranke commanded Dex to ask his fleet to undock and start maneuvers. There was no time for ceremony. Training would begin right away. Dex grinned "Aye Admiral, initiating undocking." Dranke sighed. It was going to be a long time before he felt comfortable in the new position. He looked on as ten other ships peeled off from the satellite docks and assumed formation. They were a ragtag group without much organization. He instructed Dex and Sette to pass orders onto the new captains so that their ships started to assemble in something resembling a military formation. They responded with alacrity. But it was taking them time to get their orders out to their crews. Dranke watched the chaos in consternation.

Unbeknownst to him, General Selin was watching the fleet performing in a hologram in his quarters. His mouth curled into a smile as he watched the pandemonium. He had expected no less.