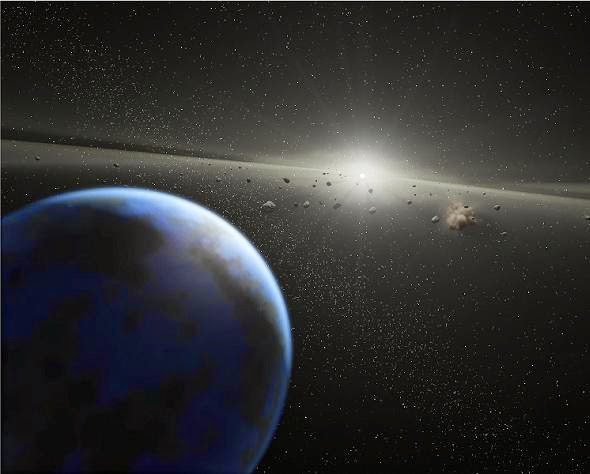 Dranke watched the galactic disk in consternation. He was quite shocked by what he had discovered, but this was a first. For humanity as a whole. He studied the area where Sol should be crisscrossing the galactic disk (it would be 'above' as of now).

Dranke had been chosen from a field of young recruits. Since the time of human spaceflight, the issues had always been related to speed. Now, with the advent of the darkmatter starcraft, it was but natural they would send out emissaries to the furthest reaches of the galaxy. Dranke and his team was the first to see the galaxy from 'dead space.' It was a shock to the system. The stars seemed to vanish.

His science officer, Fenie stared in fascination. She was the one to have discovered the anomaly. And it was frightening. Dranke yelled unnecessarily into his com "Have we got a bearing yet?" The navigator, a fresh-faced teen was interfacing with the galactic map. He turned and shook his head "They are moving too fast. If we jump at this time, triangulation will be hell." He looked out of his depth.

Dranke swore in disgust. Why had spacecommand not prepared them adequately. He wondered. This was his third command, and he had not faced anything like this in the simulation. He needed more data.

He watched the computer screen again... the unidentified alien fleet was moving fast and with purpose. It looked like they were heading towards Earth. There was no way to send a message which would reach home before the alien fleet; if indeed they they were heading where Dranke feared they were. Even if it was a peaceful mission, it would not be a fleet of spacecraft. He gave orders for the crew to prepare to head home. One way or another, they would be needed back home.

Fenie did not need a second reminder, she was already plotting the jumps back, a thin sheen of sweat on her forehead. It was cold on the bridge of the darkmatter starcraft, but that did not seem to make a difference.